(xxviii) BODY AND METAPHYSICS a retrospective 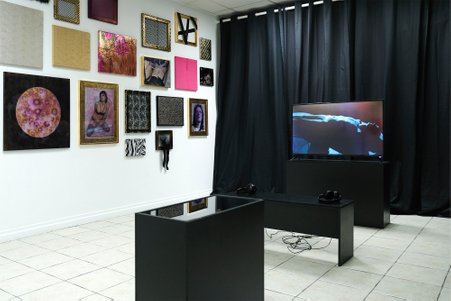 BODY AND METAPHYSICS a retrospective

Zoe Dewitt is an Austrian multimedia artist and philosopher who came to prominence in the 1980s with her music project Zero Kama and label Nekrophile Rekords. She has since worked in various fields such as painting, performance, and video art, focusing on borderline areas of existence (such as the ambivalence of life and death, sexuality, and the body) dealt with from both a metaphysical and queer-transfeminist point of view.

This retrospective of Zoe Dewitt’s work - also the artist’s first solo exhibition in France - includes references to her early musical projects, her engagement with the writings of Antonin Artaud and Austin Osman Spare (two significant influences on Dewitt), and artistic works created from the early 2000s onward; such as Liquid Bodies, a series of non-binary self-portraits and Fetish/Collected Clothes 2012–2019, in which the artist transformed her entire wardrobe from the pre-pandemic years into works of art. A central position in the exhibition is devoted to the documentation of her 2015 lecture-performance “What is a Body,” in which Dewitt explores traditional philosophies of the body and seeks to overcome the idea of it as a limited spatial container in favour of the open concept of an expanding and changeable form of existence, for which she coined the term “body as field.”

The exhibition is accompanied by a publication, driven by reflections from the artist on her work and a text by Nicolas Ballet, Professor of Art History at the Sorbonne University, Paris.

The show is kindly supported by: