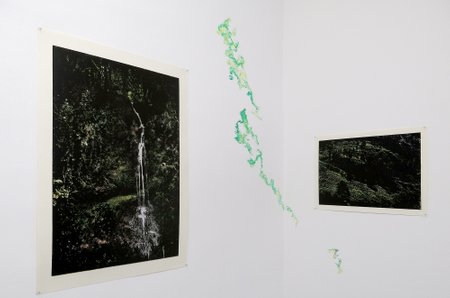 The etchings have taken the landscape as a subject only to break it apart in perception. The black on black prints deconstruct what appears to be a view through foliage; it is unclear whose or what perspective is taken, the only way of allowing the image to truly materialize is to consider it both up close and from afar. Scattered in the blacks layers are spots of light—negative space—rendered in meticulous detail. Perhaps the dark layers forebode a future that seems to be closing in on itself, pointing to an increasingly complex and bleak future. The point is not the claustrophobia of the dark, but rather to draw a picture focused on the light—openings, possibilities, spaces that fragment the black matter. The shifting, elusive perspective makes the perception of this light an individual experience: it creates a relation between the person and the image. The suggestion could be an agency in vision, the way we perceive the world and its originating points of light. - Sabrina Tarasoff, March 2017

Dom and Jean Paul Ruiz are a French artist duo. Goswell Road launches the publication CONSUMÉ PAR LA LUMIÈRE to coincide with the show. The publication is edited in 75 signed and numbered copies, with 10 special boxed editions that come with a signed lino-ecthing, and will launch at the opening.