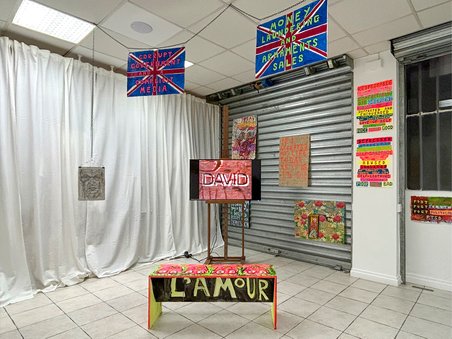 WHEN WILL IT ALL END?

"Well, I think we’re overdue a rebellion given everything we’ve been through collectively and individually... We’re either complicit or we come out of this situation more defiant. You know when they go on about things going back to normal? Well, that’s the last thing I want."

Hoyle in conversation with Nick Levine, July 2021, Another Magazine

David Hoyle (b.1962, Blackpool, United Kingdom) is a performance and visual artist. His work for the last 30+ years has referenced gender, politics, identity, mental health issues and the ongoing fight for equality.

Hoyle came to prominence in the ‘90s as The Divine David, a kind of anti-drag queen whose lacerating social commentary – targeting both bourgeois Britain and the materialistic-hedonistic gay scene, which he called, “the biggest suicide cult in history” – was offset by breathtaking instances of self-recrimination and even self-harm. Following a couple of outré late-night Channel 4 TV shows and a part in the movie Velvet Goldmine, directed by Todd Haynes, Hoyle killed off The Divine David, during a spectacular show at the Streatham International Ice Arena in 2000 and retreated to Manchester for “a period of reflection”.

Hoyle is also a prolific painter often painting in his live shows. His paintings are deeply personal, and tackle the same themes as his performances, incorporating domestic waste, flyers, newspapers, magazines, wrapping paper, and more, which reinforce his disdain for the ruling-class bourgeoisie.

Alongside the exhibition, Goswell Road publishes the first book dedicated to Hoyle’s paintings, offering an edited selection of works made between 2010 and 2022. At Hoyle’s request, all of the works are published undated: thus, emphasising their timelessness, timeliness, relevance, and urgency to the desperate age in which we now find ourselves!