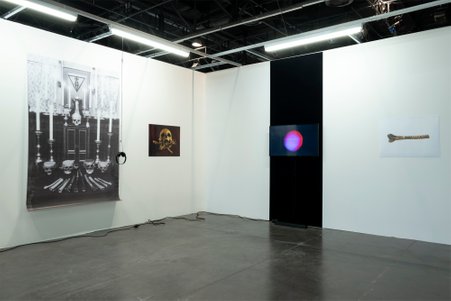 For Art-O-Rama 2021, Goswell Road is proud to be the invited guest. We present Zero Kama, the experimental music project founded by Zoe DeWitt in 1983. The first Zero Kama release was the track V.V.V.V.V., recorded for DeWitt’s own Nekrophile Rekords’ cassette compilation The Beast 666. In 1984, the album The Secret Eye of L.A.Y.L.A.H. was released, which is commonly regarded as one of the key albums of the industrial subgenre ‘ritual’. All instruments used on the recording were crafted by DeWitt herself from human bones and skulls. Due to the album’s elusive musical style, implied occult symbolism and the short-lived existence of Zero Kama – her output under this moniker ceased in 1986 until last year – the project has garnered international cult status. The new Zero Kama audio-visual work, VULTURES OVER ALAMUT (2021) was created using samples from her 1984 recordings for The Secret Eye of L.A.Y.L.A.H. processed by modular synthesis.

In her multi-layered artistic work, comprising the fields of music, performance and visual arts, DeWitt explores borderline areas of existence such as death, sexuality and the unconscious, negotiated against the background of a radical exposition of the body that seeks to transgress customary (gender) codes and significations, identifying as transgender. She gives lecture-performances to communicate her philosophy, concerning the creation of reality through language and desire.

“I regard myself as something like a nerve cell that has to process a certain input and produce a certain output. If I would not communicate in this way with the rest of the world, I would die.”

The presentation includes The Secret Eye of L.A.Y.L.A.H. (1984) album audio with images of the instruments created by DeWitt, alongside archival imagery and the new audio-visual work, VULTURES OVER ALAMUT (2021).

Zoe DeWitt is a Vienna based multimedia artist and philosopher with roots in Industrial music and Viennese Actionism, living and working in Vienna, Austria.