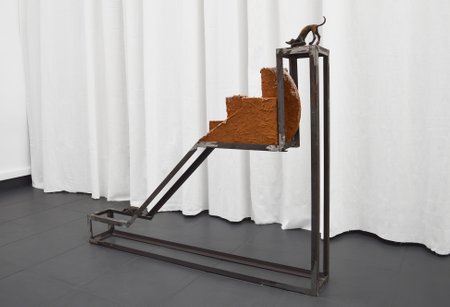 I remember, years ago, a very young man who suddenly took it into his head to refuse to say 'Good morning' to everyone in the customary way. He said that it was meaningless because everyone knew that it wasn't a good morning at all because they were all at work, and that it was hypocrisy, too, to wish people a good morning when you knew you'd be sneering and carping at them behind their backs before the teabreak had started. Of course he was technically right - but he nearly had a nervous breakdown, and finished up on his knees begging people to say good morning to him. He had to leave, and I never did hear what became of him.

A mop, casual in a bright pink bucket, is replete with a solid bronze strainer. Lovely crafted and wax polished. Used nonetheless. Pit fired bookends hold books on a simple shelf, and a candle burns. Dogs. There is something we can’t quite put our finger on? Dogs? Two steel welded frames hold unfired clay structures reminiscent of factory chimneys, covered in a rust coloured salt and red clay mixture, crystallising before our eyes. Dogs. Perhaps the frames also remind us of dogs? Two hanging boots made from rawhide, cooked in beef stew, elicit a kind of game. Another dog is dreaming, face to face with the biggest chewy toy he has ever seen. Passing through the chains a tablet awaits us. Salt crystals peeping out through the plaster, and formed like the back of an old comfortable chair. It begs the question, what is behind the fridge? Probably, dog biscuits.

Laurence Sturla (b.1992) is a British artist based in Vienna. BEHIND THE FRIDGE is his first solo show and the book accompanying the exhibition is the first book of his work. The publication is edited in 25 signed and numbered copies.