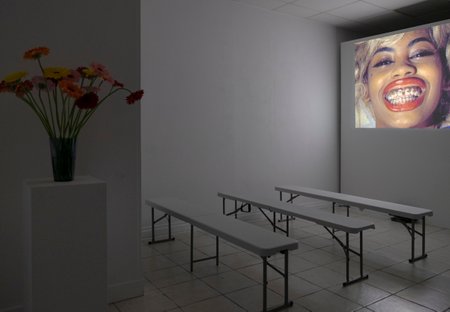 A one-day screening of the seminal video works of Tom Rubnitz (1956-1992). Rubnitz's films embodied the 80s downtown New York drag and performance scene for over a decade before his untimely AIDS-related death in 1992. Deftly parodying TV culture and fearlessly standing up to homophobic governmental policies, they draw us in with their infectious cartoonish sheen before getting under our skin and burrowing deep into our collective psyche.

“I wanted to make things beautiful, funny and positive—escapes that you could just get into and laugh through. That was really important to me. I felt like good could triumph over evil.”

His films star some of the scenes most talented and outrageous performers including The Lady Bunny, RuPaul, Sister Dimension, Hapi Phace, Tabboo!, Ann Magnuson, John Sex, Barbara Lipp, Quentin Crisp, The B52s, and David Wojnarowicz. 1989’s legendary ‘Pickle Surprise!’ found new life with the dawn of the internet in the early 2000s, becoming a YouTube classic, before taking over Tumblr, spawning countless reproductions and birthing an entire generation of video artists and YouTube stars. Our program of his video works ends with the last film that he made, in collaboration with David Wojnarowicz, ‘Listen To This’. The film remained unfinished at the time of Rubnitz’ death and is a scathing attack on the Reagan administration, that remains painfully relevant in today's contemporary political discourse.

Special thanks to the Video Data Bank (www.vdb.org) for their collaboration on this screening.