(n) THE (WO)MAN OF THE FUTURE a retrospective 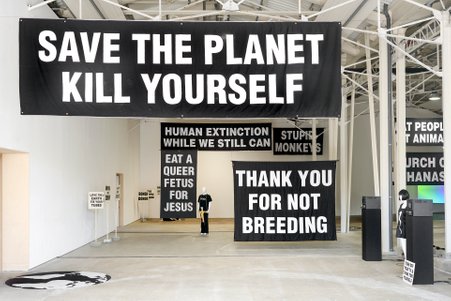 THE (WO)MAN OF THE FUTURE a retrospective

Transgender environmental activist Chris Korda (b. 1962) founded the Church of Euthanasia 30 years ago in 1992. 2022 is an important year for many reasons.

"Biographies won’t matter when waves are washing over our cities. Answering personal questions encourages people to think that the game can continue. The game is ending, nearly all of us lost, and even for the few who won, it’s a Pyrrhic victory, a first-class cabin on a sinking ship. It’s long past time to start telling people the truth. In the near future, it will not matter where you came from, or how popular you were. What will matter is how well you can cooperate with others because survival will require cooperation on a scale that’s currently inconceivable. The only story that matters now is the story of how we finally stopped burning fossil carbon and became a more enlightened species."1

Le Confort Moderne partners with artist-run spaceGoswell Road to present a retrospective of Korda's oeuvre, bringing her important work as founder of the CoE and her personal music and art practice together for the first time. The original banners and hand-painted placards used in the CoE actions are presented with diverse archival props, videos, and imagery from the actions the CoE have performed since 1992, alongside unseen iconic paintings from CoE founder Pastor Kim.

Korda's historic and ongoing practice as a programmer is highlighted as an integral part of her creative and artistic practice, as well as her music and hypermedia objects:

"I don’t write my music in the usual sense. I build kinetic sculptures, and the sculptures generate my music. The sculptures are virtual, meaning they exist only as data within my software. My process is related to the work of a relatively obscure early 20th-century artist named Thomas Wilfred. Like me, Wilfred was an engineer as well as an artist, but he lived before the computer age, so he built physical kinetic sculptures to generate his art. Part of what makes my work different is that I collaborate with my algorithms. In other words, as opposed to just using machines as servants, I invite them into the creative space as equals. They have abilities that I don’t have, and I also have abilities that they don’t have, so we complement each other. They supply speed and precision, I supply desire and intuition, and what emerges is greater than the sum of the parts. I find it surprising how resistant people are to the idea of co-creating with machines. Machines are no longer mere tools or extensions of ourselves, and their strengths don’t necessarily overlap with ours. Machines can surprise us, make interesting mistakes, and reveal hidden realms, but only if we’re willing to become fluent in their languages."2

Chris Korda (b.1962, New York City) is a transgender multimedia artist, activist, musician, software developer and the leader of The Church of Euthanasia (est. 1992). She currently lives and works in Berlin, Germany.

1and2:Chris Korda, 2021 in response to Quentin Grosset. The interview was published on its entirety in Trax Magazine issue no. 233, December 2021.

The brochure contains a text on Korda's work by Paul Clinton.

Videos: Sermon by Korda during the opening & the initiation of Lili Reynaud-Dewar into the CoE;