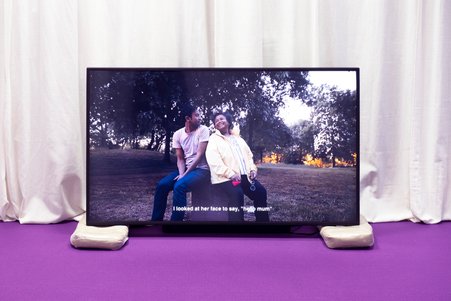 We are delighted to present a solo show by French-Madagascan artist Harilay Rabenjamina. We presented Rabenjamina's first solo show in 2017, 'TRAG&DIE', a multi-faceted work featuring film, performance and installation, which saw Rabenjamina in character. For this show, Rabenjamina presents a new body of work, shedding his usual characterisation to recount a very personal story: Le Nez de Ma Mère (My Mother's Nose).

I photographed my sister a lot in our flat and in the woods that bordered our housing estate. She was my model. I would ask her to pose. I often had to insist, arguing that her laziness to pose would be forgotten tomorrow, while the photos would remain. With time, the tendency was reversed, she asked me to take new portraits, directing me. I became her photographer. For several years now, we have seen each other rarely and have stopped our photo sessions. Sometimes we see each other at my mother's house, but it's mostly through messages that we now spend time together, always trying to share the memories that we have left.

"- Do you like seeing the old photos we used to take together?
- Yes. Please send me more of everything you can. I want to print them all. I found a website to order prints."