(l) WHAT DOES ANYTHING MEAN? BASICALLY 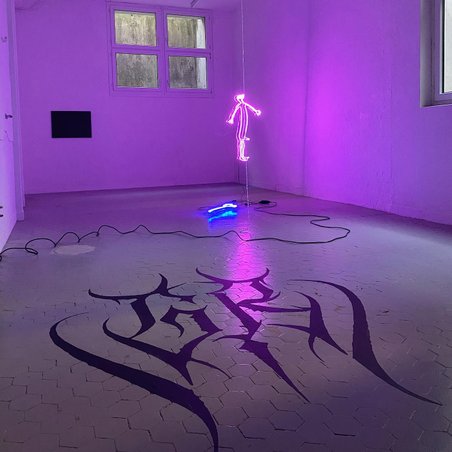 WHAT DOES ANYTHING MEAN? BASICALLY

Open every Saturday, 12–6 pm, and by appointment: info@sgomento.com

"I must go where I can achieve something, as of yet, undecided”

Ruiz Stephinson is a French-British artist duo composed of Coralie Ruiz (FR) and Anthony Stephinson (UK). They work primarily with sculptural forms and models of hospitality. In 2016, they created Goswell Road, intrinsic to their practice (Artist-Run-Space and Publishing House) it is a micro-scene, and a living, evolving work.

Christophe Szpajdel (born 1970 in Gembloux, Belgium) grew up in Louvain-la-Neuve. His work first came to attention in the mid-'90s with logos for Emperor, Old Mans Child, Enthroned, Borknagar, Moonspell, Desaster & many more. Since then, he has continued to make a significant contribution to the extreme metal scene having drawn for literally 100’s of bands.

Archie Chekatouski (born 1996 in Minsk, Belarus) lives and works in Paris. Chekatouski’s works are touchingly silly and beautifully simple. Dealing with obviousness, a certain laziness, clichés and ‘bad jokes’ the works appear peculiar and unexpected, and at the same time, might seem mundane and boring.

Evil Moisture (Andy Bolus) is a multidisciplinary artist, the aural part of which presents an extensive discography and hundreds of live concerts under the Evil Moisture moniker since the ‘90s. He has worked with artists such as Yamantaka EyE (Hanatarash, XoX, Boredoms), Hironori Murakami (Vomit Lunchs), Erik Minkinnen (as Intertecsupabrainbeatzroomboyz). He runs the Royal Sperm label under his School of Meat Cutting imprint.