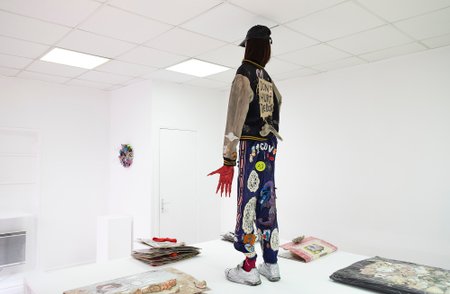 “Like a flower that grows through shit, I grew through shit, and blossomed, and I can see it now below me. I somehow always knew everything was going to be ok, I would have never sold myself to the devil side of me..” Thomas Cap de Ville, 2019

Cap de Ville was a child of the nineties and noughties. The works in the show are a personal testament to this time, to his time. He refers to these book-objects as ‘pscyhophores’: they contain hair, teeth and bodily fluids, alongside collected objects, talismans, detritus, and personal photographs, all conserved in transparent adhesive tape.

His archive covers the years from 1996 to 2019 (the year the book-objects were assembled) without clear indicators of time passing or time stamps. It remains defiantly out of time.

Tales of brotherhood, sisterhood, mythmaking, personal histories, sexuality, impropriety, vices and grace. Above all, guilt with grace. This volume contains no shame, but is contumacious in its declaration; “our little group has always been, and always will until the end”. (1)

FLOWERS: What a peculiar colour! And no fragrance. Just look at those stems! Rather scrawny I’d say...
ALICE: But I’m not a flower!
IRIS: Aha! Just as I suspected! She’s nothing but a common mobile vulgaris!
FLOWERS: Oh no!
ALICE: A common what?
IRIS: To put it bluntly: a weed!
ALICE: I’m not a weed!
TULIPS: Well, you wouldn’t expect her to admit it. (2)

This is the third archive based show in the 2019 archive program, alongside the show Goswell Road publishes the Goswell Archives book, Farewell Youth