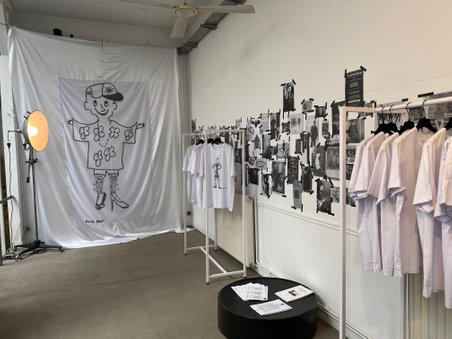 at TOGETHER Showrooms by Plan8

In February 2020, we presented for the first time a series of ‘Consequences’ drawings created between ’87 and ’94 using the surrealist exquisite corpse technique, updated by Torry with the addition of a starting title, which gives us a glimpse into the political climate of the time, in the show “IF YOU WANT TO VISIT YOU’RE WELCOME, BUT YOU WILL BE EXPECTED TO HELP WITH THE WORK”. The title of the show was taken from a sign that Torry fixed to the door of his studio in the ‘80s. His central London location became a melting pot of creative expression.

“I don’t know if I was a centrifugal force, but, being so Central meant that many people have always popped round and very often my apartment has felt like a hub of exciting ideas.” Torry

The drawings were made by Torry with friends and luminaries who ‘popped round including, but not limited to: Leigh Bowery, Boy George, Donald Urquhart, Honolulu, Michael Clark, Stephen Jones, Matthew Glamorre, Trojan, Nicola Bateman and many more.

Each tee is hand signed by Richard and sold in a strictly limited edition of 100 per design. They are all made from 100% organic cotton, in an oversize unisex-sized form, from XS to XXL.

Richard Torry (b.1960, UK) is a multimedia artist, and musician. He lives and works in London, Soho. His work is held in the collections of the V&A London, and The Met New York.