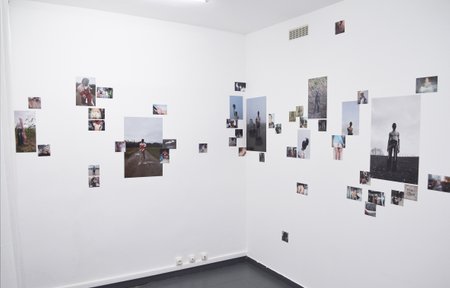 Weldé’s appropriation of digital performance culture, and his re-imagining of the selfie, the primary visual form to the new global majority’s conversation with itself, is the backbone of his exhibition at Goswell Road, FUCK THE SYSTEM.

We present three distinct bodies of work; the selfie informed FUCK THE SYSTEM series, which, though drawing on the long history of the self-portrait, is faceless. The second body of work is a selection of images from the artist’s own Instagram feed printed in high gloss square format slightly larger than the biggest current iPhone screen, and for the most part candid, though abiding by Instagram’s strict image rules. The third body of work is the oldest on show, an edited selection of disposable photographs, taken over the last four years, with a distinctly post-millennial lack of filter. It shows a tender side to the artist and his friend circle, and the purest form of trust.

Goswell Road publishes FUCK THE SYSTEM to coincide with the exhibition, a sixty-page photo book. The first edition of the photobook comes packaged with an Instagram photo, and is edited in 50 numbered copies.

Interview with Goswell Road and Patrick Weldé for i-D Magazine