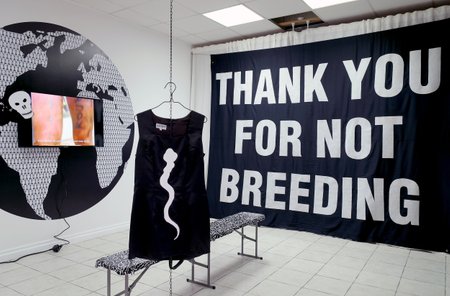 The Church of Euthanasia was inspired by a dream Chris Korda had in 1992, in which he was confronted by an alien intelligence known as "The Being" who claimed to speak for the inhabitants of Earth in other dimensions. The Being warned him that our planet's ecosystem is failing, and that our leaders perpetually deny this, asking why our leaders lie to us, and why so many of us believe these lies. Korda awoke from the dream moaning the CoE's now infamous slogan, "Save the Planet - Kill Yourself." He made the club classic of the same name, released on his own Kevorkian records imprint, in 1993, and later, re-released in 1997 by DJ Hell’s Berlin based International Deejay Gigolo Records.

At the core of the CoE's theology is the belief that every aspect of the deepening global environmental crisis, including climate change, reduction of biodiversity, poisoning of the water and atmosphere, and topsoil erosion directly results from the over-abundance of a single species on earth: homo sapiens. The CoE has one commandment that must be obeyed by all members, “Thou Shalt Not Procreate”. There are also The Four Pillars: suicide, abortion, sodomy, and cannibalism. For practical reasons, as well as moral reasons, the CoE only supports these as voluntary forms of population reduction, and sodomy, in particular, is defined, as any sexual act not intended for procreation. The CoE are fiercely vegetarian, and therefore offer cannibalism for those who insist on eating flesh.

Lyrics from Fleshdance, Chris Korda & The Church of Euthanasia,

Following in the footsteps of both the Situationist International and Dadaism, the CoE use provocative, grotesque, and often hilarious organized protest tactics, and music, to shock spectators, détourne daily life, and encourage critical analysis and thinking. They hack their way into mainstream media, culture jamming, and drawing attention to important ideas about environmental sustainability, reproductive rights, and sexual freedom. The CoE published their provocative journal “Snuff It” from 1994 to 1997, which was mailed to its members, re-enforcing their ideologies and used to preach to their congregation; “The octopus wraps his tentacles around the Earth and feeds hungrily. He rips deep holes in her flesh, and sucks up her sweet essences, water and oil and gas.” Snuff It #1, 1994.

Korda has identified as transgender since 1991, stating in 1999, “I believe, personally, that cross-dressing is the balancing of male and female aspects within a person, within a person’s psyche, within their soul, if you will. And everyone has these male and female aspects. I mean, in most cases, they are grossly out of balance due to the extreme gender socialization that we’re exposed to as children. Men are forced into extreme male gender roles, women are forced into extreme female gender roles.”

To its members the CoE is a religious organization focussing on important ecological issues, to others it is an elaborate joke, to some it is performance art, but others claim it is a dangerous cult. The CoE reached a mainstream audience in 1997 appearing on The Jerry Springer Show, in an episode hilariously titled “I Want To Join A suicide Cult!” - a pure act of guerrilla performance art.

The exhibition features newly restored video footage and photos of Church Of Euthanasia actions, and a plethora of original CoE artefacts and memorabilia. We will also debut the new Chris Korda & The Church Of Euthanasia anthem, “A Thin Layer of Oily Rock”, distribute the long-awaited fifth issue of the Church Journal Snuff It (made for the occasion by the CoE) and screen the video for "I Like to Watch", alongside newly transferred footage of The Jerry Springer Show.

Chris Korda (b.1962, New York City) is a transgender multimedia artist, activist, musician, software developer and the leader of The Church of Euthanasia (est. 1992). He lives and works in Boston, Massachusetts.