Back to Artists Publications 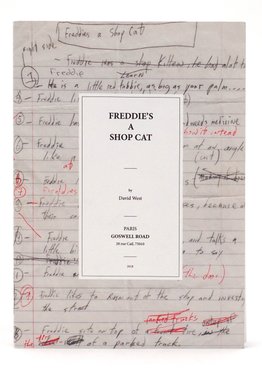 All copies are hand numbered

Freddie, who became a working Shop Cat, was adopted by the illustrious Kurland family - Hannah, her daughter Vita, sisters Justine (noted photographer) and Yetta (noted political flack), and Alice O’Malley (another noted photographer) - living for a time at Hannah Kurland’s boutique on Ludlow street on the Lower East Side. My girlfriend at the time, now my ex-wife, had her design atelier in back for a while, and we both fell for this cat. He stayed with us sometimes.

After we left town, I heard he got hurt running across the street, and became an apartment cat, living upstairs with the Kurland crew. Lucky chap. I wound up hating the story I’d devised for this, but thought, ‘hey - some of the drawings are ok by themselves’ and ‘who in the fuck needs a storyline anyway?’ Drivel.