Back to A Goswell Reader 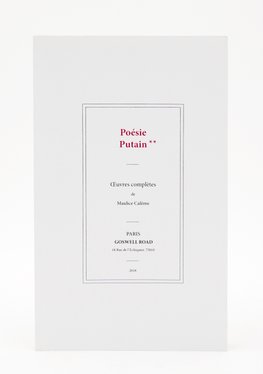 [Book ships in one week]

Maulice*Calême is an anonymous poet and avatar, purportedly based in Coco Islands. Her poems were initially diffused as viral texts, emails, and short videos, on social networking sites such as Myspace, the underground MyOwnSpace, and Facebook. This book collects the complete written works of Maulice*Calême, spanning the period 2008 - 2017.

Poésie Putain** is the first publication in the Goswell Reader series.